Most Played Funeral Songs By A Funeral Director

Every funeral is personal to that person and their family. A way to make the funeral that bit more personal is the choice of music. We hear on a daily basis songs from such a wide variety of different genres. Classical, Rock, Soul, Swing in fact you name it I’ve heard it.

Of course there are your popular choices like My Way - Frank Sinatra or Unforgettable - Nat King Cole which from our local areas are two of the most popular tracks. But what really intrigues me is the story behind every piece and the meaning of each choice of song.

When arranging a funeral we are privileged to get to know families who “most of the time” are talking such lovely words of their loved ones and we hear so many heart wrenching stories about their lives and the music behind them.

“Oh Mum really loved that track - but we can’t have that, it wouldn’t be appropriate” I reply to families saying that the music and service is their choice so please go with what would be right for their loved one.

Over the years music has become more popular and a really important part of the service. I remember starting my professional life with my Dad telling me that most families are happy to go with whatever is at the crematorium. Wow! how things have changed in such a short period of time, well seventeen years :-). Now we are downloading different tracks everyday, most I haven’t heard of and if I haven’t then my Dad definitely hasn’t.

I think what’s changed the industry was the mp3 player. Having the ability to download any track and know that it's going to play rather than the hit or miss scenario we used to have with CD’s. 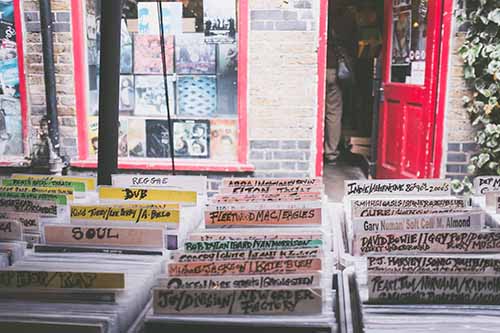 We’ve always had a rule of having the music at least 3 days before the funeral whether being CD’s or downloads, so that we can check the tracks will work.

When using CD’s, our system was far from foolproof as I remember on numerous occasions cd’s working one day and not the next!

I feel a quick story coming on:

I was a young funeral conductor, 17 to be exact, everyday I would pester my cousin Andrew and my Dad to give me a chance when one day Andrew said to me “your up” :-). I was slightly nervous but anyone who knows me, knows that I’m pretty confident so was full of belief that I could do my family proud. So not long into my conducting career I had my very own music mishap -  I had told family prior to the funeral that the copied CD definitely worked as I had tried it in our CD player. Only to realise at the end of a service with their loved one waiting to be carried out to a special track which I cannot recall ( probably because I want to erase this memory ) and simply did not play. I was standing at the the front of a Church praying for the track to start. Around 200 people staring at me probably thinking this young lad doesn’t know what he's doing while I’m going bright red. After many taps on the machine and a little bit of patience the song eventually started and I had learned my lesson on copied cd’s. Many people commented after the funeral that they felt for me but the only thing I cared about was that the family and their loved one got what they wanted and although they had to wait they did in the end.

Here are a small selection of popular music arranged in different categories to reflect sad or happy funeral songs; songs for mum or dad; comforting songs or traditional tunes; modern and unusual songs; as well as the all time top 5 songs of music that is regularly played at funerals:-

 Over the Rainbow - Eva Cassidy

 Nothing Compares to You - Sinead O’Connor

 You Are the Sunshine of My Life – Stevie Wonder

 You Raise Me Up - Josh Groban

 Thank You for Being My Dad - Jon Barker

 In the Living Years - Mike & the Mechanics

Funeral songs for a friend

 Don’t You Forget About Me – Simple Minds

 Only Fools and Horses

 Match of the Day

 You Are Not Alone – Michael Jackson

 Another One Bites the Dust – Queen

 Ding Dong the Witch is Dead – From Wizard of Oz

 Lay Me Down - Sam Smith

 Over the Rainbow – Eva Cassidy

 Spirit in the Sky – Norman Greenbaum/Doctor and the Medics

 We Are the Champions – Queen

 Celebration – Kool and the Gang